The Simple Design of the Paper Clip 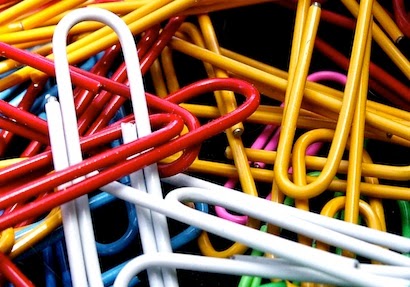 I have an interest in the design of ordinary things. Sometimes these things are so ubiquitous we miss the subtle design genius, and why it's so useful.

Now, let's look at the simple design of the paper clip.

According to the Early Office Museum, pages of paper that are normally stapled today were fastened together using methods such as paper or wax wafers, straight pins, rubber bands, or stitches made with needle and thread. By the late 1850's, metal machine fasteners were introduced to meet the demand for methods of fastening large amounts of paper, though the other methods continued for some time later.

Although the first paper clip was patented by Samuel B. Fay in 1867, it was in 1892 that Cushman & Denison introduced a paper clip fastener design made from bent spring steel wire called the Gem clip. These are the same designs used today.

This design is deceptively simple. It comes in different sizes to accommodate different amounts of paper. Now it comes in all sorts of colors and made from metal or moulded plastic. It's become an accessory as well as an necessity.

What makes this design so functional is that it does what it says it does. It fastens paper together in an elegant manner. Even today, there's not much improvement to the original design.


Photo courtesy paulcopeland of morgueFile.com
Posted by Kerry at 11:30 AM