A High View of the Graphic Design Profession 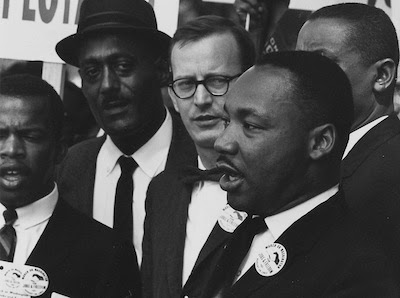 The Inauguration Day of president Obama has just passed. But it was also the day to remember the man, Dr. Martin Luther King. That holiday reminds me of the things Dr. King fought for, like human rights, human dignity, and basic human worth. Some people make the mistake that he was simply demanding rights for African-American and poor people. But that’s not the whole truth.

Photo courtesy U.S. National Archives
Dr King was challenging the notion that if all human beings are created equal by their Creator with certain unalienable rights, then this has practical implications. In other words, it’s contradictory to believe these principles are true, and yet treat people like they are inferior or superior on the basis of their looks or social status. Following, it would also be an error to judge people on criteria outside behavior and character, or to believe that government is what grants or takes away human rights.

This also has a practical implication for designers. We design things for human beings. Our work should respect human communication, human usability, and human dignity. And it should attempt to elevate the human condition in some manner. The act of designing something is more than placement of images or text. Graphic designers, design engineers, and artisans do what they do because human beings matter. We understand that our work will have an influence for good or ill. Our work sometimes will outlive us and influence generations.

That’s a big statement considering the amount of advertisements, flyers, and throw-away items many graphic designers create. But it’s these mundane things that give a society it’s shape, if you will. Every generation has a feel and look that either brings nostalgia or angst. The simple symbol of the swastika is impregnated with more meaning than the shape it holds. The furniture, hairstyles, cars, and fashion of the 80’s mark what the 80’s represented, far beyond the items themselves.

Designers are too quick to relegate the things we produce to simple client whims or in-house, corporate wrangling. But whenever we put our hand to produce anything, we imbue everything with a bit of ourselves. And with skill we may even communicate more than a simple message. We may communicate that human beings have intrinsic value and worth.
Posted by Kerry at 7:50 AM