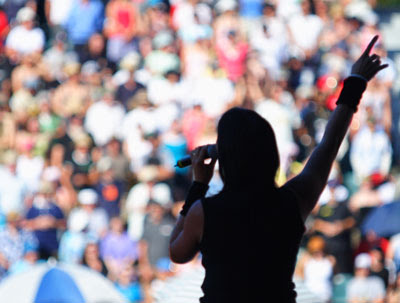 Here's an interesting article from a independent musician about how she defines success and failure. For her, her measure of success was to sell millions of records, and win a Grammy by the age of 30. She didn't achieve this. But, she has learned not to view missing her goals as failure. But rather as not successful.

I agree with her sentiment as far as it goes. When I set high expectations and I "fail" to achieve them, it isn't failure, but a lesson. However, I have a slightly different take on this. Perhaps success is not found in achieving high expectations, but living consistently with one's values and ideals.

For instance, I don't see getting a Grammy as success, but it would be an achievement. It is a measure of the type of success one is having, but not success itself. For instance, if an artist simply wants to be famous, they can do so without getting a Grammy. They can run down a busy street naked in front of a TV news crew. Then they can be seen by a lot of people, and maybe get air time. It won't be for their music, but they will achieve becoming famous.

However, if the artist values the process of creating music, sharing it with others, and making a living doing so, they can put together a plan to live this out. The plan must be "doable" and "livable" in order to be a good plan. Success can then be measured by realistic goals and consistency, rather than dreams. Dreams are good, but not as a measure of success.

As designers, we need to set realistic goals and objectives. This is not only necessary for our careers as designers, but for each project that we work on. We need to be able to live our values as designers, set realistic objectives that lead us in that direction, and be reasonably achievable. Then we can look at our work, see our achievements, recognize our shortcomings, and use them as indicators of our trajectory as designers. For success isn't measured by our dreams, but by our choices.