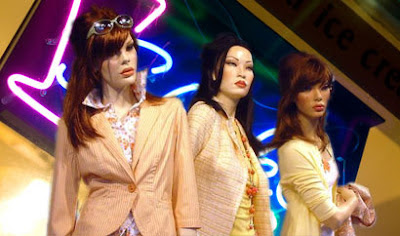 With the concern for outside appearances many ignore the more important matters. The insides, or the guts. Yes, the guts are not pretty, but they establish who you really are, much more than outside appearances can. This disconnect between what you really are, and what you want to project is called hypocrisy. But many engage in this because it is much easier than dealing with true processes and values.

For instance, there was a time when the reputation of a company or an individual artisan was established through hard work and time, and genuine customer satisfaction. Now, because the relative ease of mass communications, many people want a quicker way to establish a positive reputation, whether deserved or not. It seems to have gotten so bad, that people would rather create a new logo than deal with serious flaws within a company or its structure.

Have you ever wondered why changes in leadership always seem to usher in a new logo? It is a shorthand way of announcing that serious changes are ahead. All by itself, this isn't bad. But the problem is the lack of thought. Decisions are made so quickly now, that thought is becoming a nuisance. Change for change sake will get attention, and even momentum. But if there isn't anything behind it (like a real reputation) it is all just fluff.

It's like using a Starbucks-looking design, website, and advertising. But in reality it promotes a dumpy little diner which has lousy service, and no regular visitors—oh, but by the way, they do serve coffee.
Posted by Kerry at 9:30 AM